A Tale of A Gathering of Strangers

Transglobal Underground began in London and could have ended in London if not for a network across Europe, which saw us touring the continent pretty well non-stop for more than 10 years. We saw a lot of changes over that time, a lot of possibilities and a lot of magic, some of which came true, some of which fizzled out. Our popularity ebbed and flowed in different parts of the continent and we owed that network something for all it had given us.

A Gathering of Strangers was born partly out of that desire to give something back, and also to stop and take a musical look at what we’d seen. The connections and disconnections between the east west and centre, between the north and the south. The history of immigration, the attitudes towards it now and then, and the issues of unity and disunity in the EU, the body mainly responsible for allowing the networks we travelled on to exist. We entered the unfathomable online offices of the EU Erasmus fund, filled in many forms of byzantine complexity, gratefully received some cash in our back pockets and went on the move.

The initial stop was Budapest, where we knew of Lepês Gâbor and Nóri Kovács from their work with Ballkan Fanatik. The visit began in the neo-renaissance splendour of the Hungarian Heritage House in Buda and ended in the subterranean depths of the Cokxpon Ambient Society in the company of familiar friends and unfamiliar forms of alcohol. 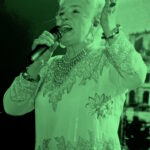 Sofia involved a stay at the Rodina hotel, a megalithic remnant of the communist area with some bedbugs who’d been hanging out there ever since. A more atmospheric remnant of that era was the old Bulgarian national radio offices, now home to Graffiti. Yanka Rupkina, legendary leader of the Trio Bulgarka, arrived in the building she’d worked in so many times in the past to deliver an impassioned vocal on ‘Keranka’ before going on to perform at a late night soundsystem in a downtown bar.

The 90s were long gone and a culture of endless possibility and improbability, up and close and under the radar, from Stoke Newington to Pest XI and to Zizkov, had a terminal, threatened feel to it. The Cokxpon crew had a fragile grip on their riverside bar by the Petofi Bridge as the last part of central Pest felt the warm turgid wind of gentrification blowing in from the Danube. In Prague, Autopsia and Achtar functioned out of a record shop near the notorious Roxy Club, a building once powered by a single cable snaking down from the house next door. Now the district was a tourist centre where visiting Brits had to promise they weren’t on a stag night before they could order a drink. London, was, simply, priced out of the continent as some fool of a Mayor partied with far right spivs and sold the cities soul off to the highest bidders. We didn’t realise at the time what that would lead to. 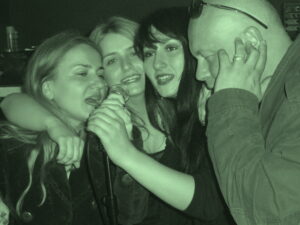 Three regular collaborators with TGU came into the mix. Recycler were (and recently have again become) a legendary underground Parisian breakbeat/global underground ensemble putting out tracks on Nation Records. Valravn were a leading exponent of Scandinavian folktronica, making dark, stormy music during their 10-year existence, during which they toured with Transglobal Underground. Village Kollektiv were an offshoot of the wonderful Warsaw Village Band. Our friend’s briefs were to not fit in, so they didn’t. Valravan swarmed over a Bulgarian folksong and Recycler came up with a soca track, which turned, into a different Bulgarian folksong. And the Kollektiv sent in some traditional psychedelia from Warsaw about a Polish farmer transformed into an ironworker in America.

Back in London The Perunika Trio were by now regular performers on the UK circuit. Eugenia Georgieva, as at home, if more so, in south London than Bulgaria, led one of the first UK ensembles to be accepted as artists with a cultural contribution as much to do with modern diaspora as folklore traditions. That attitude showed in them pretty well rocking out on ‘Hey You Sheperd’ which, despite the name, was actually about a camel herder, while Eugenia sang solo on ‘When you hear me sing’ in a darker style closer to her later work with Yantra. 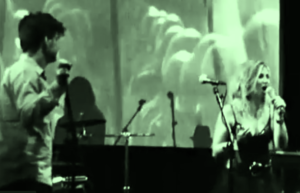 Jim Moray, already known for mixing traditional English music with all sorts of surprises, had been a target from day one. He sent in several divergent versions of the song ‘Lisbon,’ a naval adventure that by some process of osmosis we no longer remember got mixed in with Nóri singing a song of Hungarian youth being pressed into the army. One important intention was that English traditions should be an integral part of what we were doing and not seen as a separate world, something that we felt was often a musical and geographical cockup. This hole was filled with aplomb by Stuart Slater of Tindersticks delivering the old music hall song of a lost English coal miner. Appropriately enough he recorded it in France

Irish singer, instrumentalist and writer Martin Furey’s  contribution involved long late night emails as vocal takes flowed back and forth across the Irish Sea, followed by the addition of Senegalsese/Czech DJ Bourama Badjis lyric emailed over from Prague. None of us stood in the same place till a show in Prague a year later. Martin then became a major part of the touring band along with Jim Moray, and the Perunika trio, with Nori and Lepes joining when possible.

‘A Gathering of Strangers’ came out in 2010 and received good reviews but confused many people at the time. Firstly it didn’t sound like what people expected of Transglobal Underground, which was, of course, partly the point. Secondly we put it out under the name U.N.I.T.E, an acronym stipulated in the EU funding. No one was sure of what U.N.I.T.E. was, us included. On the road it all came into focus. Physically crossing the borders we’d all crossed online together showed us a whole story, one we’d not completed with the original album itself.

We considered remixing the whole project after the completion but something told us to wait, because it wasn’t the right time. And it all looks very different with hindsight. The rise of Fidesz and Ukip, the rise of the Polish right, the disillusionment in the Czech republic, the abandonment of Greece. And now the looming breakup of the UK. We all looked at the connections and disconnections across Europe hoping that the connections would prove stronger. We were wrong and some of the music we made then sounds to us now like a warning that no one heeded, ourselves included.

Well In 2021, the uncertain future has arrived. But meanwhile the migrations continue. The shepherds and the miners and the ironworkers of the past are still here, their spirits living on in new arrivals who travel via leaking boats and the airless insides of containers. We present this re-imagined final version as a tribute from all who had to cross borders in the past to all who keep crossing them today.