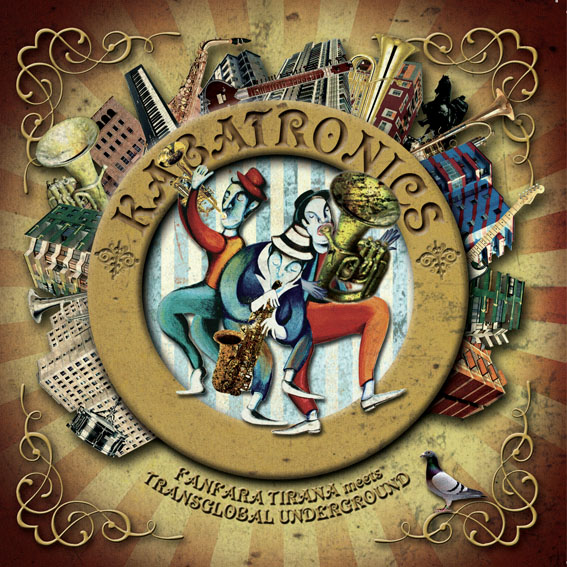 ‘Kabatronics’ is a collaboration between Transglobal Underground and Albanian brass masters Fanfara Tirana. Beginning 2 years back as a remix operation, the project expanded into an exchange of ideas between Tirana and London that went beyond the Balkan brass roots of the music and bringing in a whole new cargo of inspiration from both centres. Along with the main Fanfara Tirana brass crew and  TGU regulars Hamid Man Tu, TUUP, Sheema Mukherjee and Tim Whelan, ‘Kabatronics’ features a number of star appearances from Albanian folklore legend, vocalist Hysni Niko Zela, and  Johnny Kalsi of Dhol Foundation notoriety. Also featured are Marko Markovic, Frank London of the Klezmatics, Kosovan rapper Elda Kuqja, Egyptian percussionist Aly El Minyawi and a whole bunch of others. “Kabatronics’ mixes the familiar with the totallly unexpected, whether you’re in the UK, Albania, orbiting round Mars or anywhere else in the galaxy…

As the year heads to a close, Tim Whelan of TGU joins Paris based global traveller DJ Click and enigmatic Nation Records legends Recycler for a fusionist mash-up at Les Apaches, this Friday December 16th.

Hopefully some of those reading this will have checked out the album ‘From Transylvania’ by Lil Obeah, the Bucharest based outfit who we worked with last year, along with Dub Colossus. Dub Colossus remixed some Read more…

Mokosh: a song for friends in Ukraine

Greetings from Transglobal Underground. We recently put a new track together as a message of support from friends we’ve previously worked with in Kiev and elsewhere in Ukraine, notably the Sheshory festival, which remains one Read more…